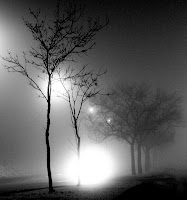 There was a day when Hope no longer answered the door when Pain came knocking. Pain was a faithful visitor who’d come calling each morning as Consciousness arose, enlightening the eyes. Sometimes, he’d bring his companions Self Pity, Depression, Fear or Discouragement. On days when Pain’s voice seemed especially loud and demanding, he’d bring along a deadly comrade named Despair and overstay his welcome.

Welcome? Yes…Pain was welcomed by Hope because Acceptance and Faith dwelled within and they knew Pain was always laden with treasures. He might hide the gift beneath his thorn-rimmed cap, within his thistle-filled pockets, underneath foreboding wrappings or nestled in the center of his filthy, tight-fisted grip. But when Pain visited Hope, the treasure outweighed his light and momentary affliction.
But this particular day…Hope didn’t answer the door. As Consciousness sank the evening before and Pain made its temporary exit, Despair had slipped in unaware and hid within the shadows.
In the midnight hour, Despair found the bedside of Faith and drew close to his ear. He began to sing melancholy songs of doubt and disbelief that infiltrated Faith’s beloved sleep, turning dreams into disparaging fogs of defeat. Every melody was haunting in its heaviness and when Faith stirred restless, Despair’s rhythmic lullabies of Giving In and Giving Up would send him back to slumber. Finally, Faith’s face lost his color and his breathing took on a death rattle.
Despair quickly made his way down the hall to find Acceptance sleeping on a cot right next to the front door. His countenance was peaceful with an apparent joy that filled Despair with disgust. He reached into a bag and pulled out vials with various labels, such as “Unfair,” “My rights,” and “Don’t deserve.” He quickly filled a syringe with a cocktail of poisons specially designed to paralyze Acceptance with bitterness. While the venom filled his veins, Acceptance’s brow began to furrow, his lips tightened, and his previously opened hands were now clenched in a fist. “Victory” whispered the murderer.
Despair snapped his bag shut and stood to his feet with smug confidence. He slithered towards Hope’s bed chambers and smiled at the silhouette of his enemy. With demonic pleasure he closed the door and locked it from the outside. It would be too strong for Hope alone to open. He imagined the morning’s scenario as Hope would find itself barricaded and resisted at every attempt to escape. Eventually, Hope would be deferred and weakened to the degree that he would get sick and die like the others.
As Consciousness peered over housetops and flooded the valleys, a cackle was heard in the winds as Pain came knocking on someone else’s door.
Prov. 13:12 “Hope deferred makes the heart sick, but when the desire comes,
it is a tree of life.”

Psalm 71:14 “But I will hope continually, And will praise You yet more and more.”


Note to the reader: I wrote this parable after a day of praying for a precious friend of mine in dark depression. Just as Proverbs is personified in the Bible, the reality of pain, fear and despair took on characteristic roles and I seemed to watch their insidious actions carried out as you read above. A friend of mine said, “Shannon, that’s so powerful, but very dark. Could you add light at the end?” This is why I put the verses. There are many more promises that God has made to us. They have truly become what Hebrews describes, “an anchor to my soul.” One of my favorite verses is Isaiah 50:10, “Who among you fears the LORD and obeys the word of his servant? Let the one who walks in the dark, who has no light, trust in the name of the LORD and rely on their God.”