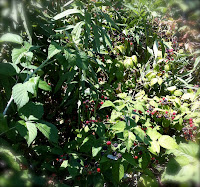 I jumped out of the van, donned my not-so-stylish gardening gloves and walked confidently to a conglomerate of black raspberry bushes. I’d been warned that getting to the berries would not be easy due to years of neglect in keeping the weeds out and trimming back the branches. But the value of the berries outweighed my imagined discomfort at wading past whatever the curse might have birthed.

I noticed that the perimeter of the bushes held clusters of “easy pluckers.” I had ravaged several of the branches before realizing that my gloves had made the force of my touch so insensitive, that I’d accidentally crushed most of those poor guys. There they lay bleeding their purple dye all over the bottom of the bowl while a tiny snail stayed dormant in its protective portable home.

“Well, that wasn’t smart,” I mumbled to myself while tearing the scapegoats off my hands.

As the breeze began to pick up, it tossed the prickly weeds and fruit branches from side to side and revealed the buried treasure in the center. Shiny black and pleasantly plump raspberries, twice the size as the bludgeoned bunch in my bowl, filled up the core and invited my hands to come. Since I couldn’t reach them from where I was standing, I carefully stepped into a portion of the heavily thorned bush and leaned over as far as I could reach.

Then it happened. A strong gust of wind blew and whipped every surrounding branch of that bush so hard that I was completely encased by nature’s built-in security system. The thorns stuck, punctured, poked, prodded and scraped every exposed area of skin from head to toe. The areas I had clothes on were snared with a Velcro grip making a quick escape impossible.

I’ve been attacked by opponents in sports, intimidated by bullies in school, even jumped by a drug-crazed teenager in Chicago. But to be ambushed by a squadron of black raspberry branches was a first. 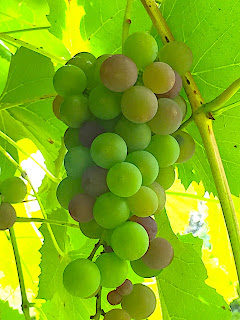 All I wanted was some fruit…was that so wrong? Wasn’t that why they were planted years ago? The berries have medicinal, nutritional and sensational taste qualities for the eater to benefit from. But due to neglect of proper weeding and careful pruning, the sin-caused curse of “thorns, thistles and briers” left the fruit picker with speckled and striped wounds.

Jesus said in John 15:1-4 (NLT) “I am the true grapevine, and my Father is the gardener.2 He cuts off every branch of mine that doesnΓÇÖt produce fruit, and he prunes the branches that do bear fruit so they will produce even more. 3 You have already been pruned and purified by the message I have given you. Remain in me, and I will remain in you. For a branch cannot produce fruit if it is severed from the vine, and you cannot be fruitful unless you remain in me.”

In just four sentences, I’m reminded that my life, grafted in to the True grapevine, is designed to bear “fruit.” That my heavenly Father has a love that never neglects, stops tending, nor ceases from pruning. His goal is that a life will produce more and more fruit and the pruning and washing process comes from the Word of God. It will cut and sever just as surely as it will wash, cleanse and heal. The gardener instructs “Just remain in Me” and you will bear fruit. Despite your growing in a sin-cursed world, surrounded by thorns and briers, when branches have been pruned properly, it bears abundant fruit readily available for the passerby. Fruit that is nourishing, healing, and satisfying to a hungry soul.

Remember that the Gardener’s hands are sensitive to what He touches and knows the pressure He applies when fruit is plucked. He knows exactly where to cut a branch so that its amputation will produce more fruit than ever before…but “let patience have its perfect work, that you may be perfect and complete, lacking nothing.” (James 1:4)