I originally posted this in March of 2009 on my previous blog site, but it has become one of the most popular and top read so far. Laughter is good medicine. Since my husband and I celebrated our 14th anniversary not long ago, and I have another gift card for dinner in my purse, I thought I’d re-post this for a smile. I do hope our next dinner out will be quite a bit different than this one.

Special nights call for special preparation. Scott and I received a gift certificate to a posh restaurant (one we’d never be able to set foot in otherwise) and I winced while gazing at a “too-tight-at-this-age” black dress. The next outfit in the closet was as frumpy as Grandma from the Walton’s, and the third option displayed abstract art from Gerber on the shoulder. Actually, the majority of my clothes could be used for Rorschach inkblot tests nowadays. I settled on a mustard yellow outfit stuck way in the back. Without a tan, it makes me look “ill” in full sunlight, but I reasoned it would be dark soon and the remaining selections weren’t even negotiable. I tiptoed past the nursery into the bathroom to call all cosmetic promises to the task.

Looking up into the mirror, I remembered a sermon I’d heard years ago about vanity. The essence of it compared the length of time we take to prepare ourselves outwardly versus how long we prepare our hearts inwardly before coming to church. I heard it years before I discovered that “crow’s feet” did not refer to poultry, “laugh lines” weren’t from a comedy skit, and “baggage” is what fits right underneath aging eyes. What I actually needed was duct tape and Spackle rather than CoverGirl and MaryKay.

I plopped the magnification mirror up on the counter and scared myself. There was my eye, 12 times its normal size, with the surrounding wrinkles making me resemble a friend’s Chinese Sharpei. I wish makeup was a paint-by-number set…I don’t do well with freelance. But there I was, pulling feverishly at skin folds, contemplating the pros and cons of botulism injections. Maybe I should use tape along my forehead like one of my friends do for her wrinkles. I mean…packing tape came in tremendously handy as a substitute belt when I was pregnant. The small strips I had attached from my pants to my tummy held up great during one morning’s church service. If it didn’t crunch so loudly when I walked and hugged people, I would’ve used it a lot more often.

Time was running short. I realized I was bordering on obsession and quickly prayed, “Lord, I just wanna look nice for my honey. Could you help Scott see past my newly painted clown face and exaggerate his color-blindness for my apparel? Could you blur his vision from seeing my very tired, aging eyes?” 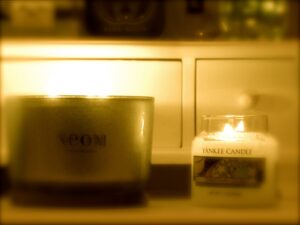 I’m here to say, once again, that God answers prayer. The restaurant’s lights were so dim, the whole meal was spent conversing with his silhouette. He would often lean forward and ask me to repeat myself as his hearing is going bad and he couldn’t read my lips in the dark. Afterward, we’d stopped for coffee in a well-lit place, but within minutes, his allergies erupted and he could barely open his watering eyes. We quickly had to make our way home. As soon as we walked in the door, the smell from a candle I’d forgotten about hit us like a caramel tsunami and Scott began to wheeze asthmatically. We thanked our gracious babysitters and apologized a thousand times over for the obnoxious smell…which was now making me nauseous.

As I watched my handsome husband make a beeline towards the bedroom, his eyes were closed, swollen, watering, and his breathing was labored. Within minutes, the lights were out, his head covered and he’d drifted off to sleep. It was 9:15.

God answered prayer. Not exactly the way I thought He would…but He always answers prayer.