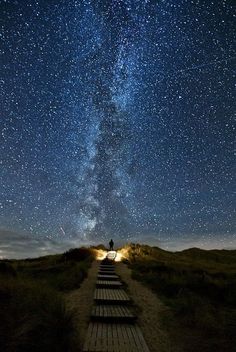 Before there ever was an iPhone, Kodak, or DaVinci, God would give man stunning visuals of His glory, majesty, and deity in creation. David would write a song about what he learned concerning God one night; “When I look at Your heavens, the work of Your fingers, the moon and the stars, which You have set in place, what is man that You are mindful of him, and the son of man that You care for him?” Psalm 8:3. Just a glance upward into space and a lesson was learned about the magnificence of God, the minuteness of man, and the incomprehensible love and tenderness of the Amighty.

In John 9, the disciples watched Jesus approach a man who was born blind. They believed blindness was caused by family sin, but Jesus said (in essence), “It’s not because of anyone’s sin, but that the work of God can be seen in his life” (verse 3). After the man’s eyes had a divine mud bath, not only was sight given, but the man’s brain was able to understand all of the images he was seeing for the first time in his life! The disciples learned how little they knew of the ways of God, while the man that was healed taught truth to the blind Bible scholars of the day. Jesus would take a flower and tell people to learn how He defines beauty. He would point to a bird as an example of the provision and care of God. He would lift a little child up into His arms and invite people to gaze at what a soul must resemble to enter into heaven.

A couple of summers ago, I decided to take my best friend Linda into the city to visit our public market. Talk about a learning experience. Being a southern California native, it’s always fun to expose her to things she’s only read about in books or seen in movies. I think Upstate New York is as foreign to her world as Australia would be to Alaskans. 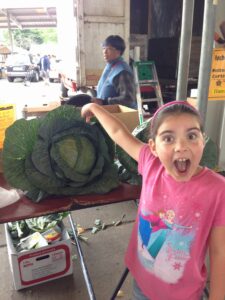 We joined up with my friend Jane, a “professional tour guide” in regards to market mayhem, and wound ourselves through the maze of people, stopping periodically to take photos of food the size of small children. By the time we collapsed in the car, we had peaches disguised as donuts, apples sufficient for a meal, and tomatoes so genetically altered, they could pass for a candy line.

But the most meaningful visual Jesus gave me that day was totally unexpected. We had just pulled into a parking lot I would never walk through in the dark. I grabbed hold of my little girl’s hand and headed towards the entrance, when she said “Mommy! I have to get something for you!” She started flailing my arm to let go of my grasp, but that wasn’t gonna happen. Commence…the drag.

Like going head first into a hurricane, she began to pull my weight and disagreement across the street. “Strong willed” can seem like such a mild diagnosis for her on days that end in “y.” Finally, I halfway relented and followed her towards a fly-infested dumpster bin, shoved up against a security fence, encompassed by an invisible force field of stink. 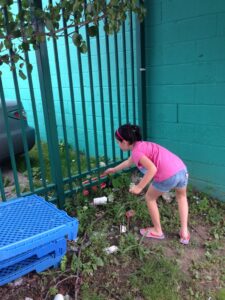 “Maddie! We are not going over by the garbage! We are not going to…we are NOT…Maddie, don’t touch that!” I have a defiant, selectively deaf child is all I could think. But before my thoughts went further, she yanked free of my hand, ran three steps to the side of the dumpster and reached towards the dirty ground where trash was strewn about.

I pulled my out-of-breath scowl right up next to her, just as she pulled up a tall, dangling plant from the ground and handed it to me. “Here Mommy! I want you to have a flower! I love you!” I stared dumbstruck at the little symmetrical Queen Anne’s lace that had grown unhindered, unaffected, unmarred by it’s surroundings. The air that little flower breathed was a stench that nauseated me after only a couple minutes. Then the Lord spoke something so personal to my heart.

Visuals. So many lessons learned. 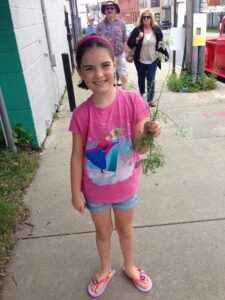 It’s what Jesus does all the time. I wonder how often He has to drag me along, resistant, reluctant, the strong-willed child that I am, just to give me a visual of His love.

May you have eyes to see and ears to hear a life-changing lesson He may have for you today.