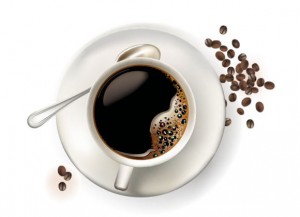 Nevertheless, after a few quick “dozes” through prayer, I opened the Word and found the Lord waiting. He didn’t mind the fog that permeated my thoughts. The Lord said that He would dwell in a thick cloud, so I was merely being a gracious hostess and provided the cloud for Him.

You’re probably familiar with the scene in Mark 3:1-5, when Jesus walked into a synagogue filled with critical eyes and fault-finding attitudes. Have you ever been in a crowd like that before? I’d rather do the polar plunge in the Antarctic than revisit some of the churches of my past. But Jesus is the Author of climate change. His eyes of grace and compassion found a man with a withered hand. I don’t know how long this man may have been going to the synagogue, but in a place where Psalms were sung, blessings given, and the scriptures read, he sat with a significant, obvious deformity. Whether he was born with this or it happened by some event, can you think of the implications it had in his life? Can you imagine the days, weeks, and years of the impact? It’s one thing to have no hand. But it’s a bit different to have one that looks weird and doesn’t function the way it’s supposed to. 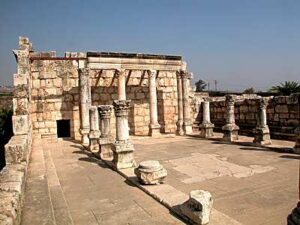 We use our hands to work, write, feel, touch, fight, carry. We use them to serve a meal or caress the brow of a sleeping child. But on a deeper level, I have been this man, and that, more than once. I’ve known what it’s like to sit in the midst of a group of Christians, sing worship, hear the word of God, watch blessings given and received, and yet have this place in my soul that was so withered and weakened. Not only that, but when I compared myself to others, there was a deformity that felt obvious. A handicap and withering within that affected my life, love, and service.

But then Jesus came. Religion and tradition didn’t keep Him out. He can walk into any home, any bar, any church, any situation, and speak, teach, or touch people that need Him. And that day, He asked the man in the synagogue to no longer sit hidden among the others, but stand before all to see. Stand before the powerful eyes of criticism, spiritual pride, accusation, and legalism, and risk embarrassment, ridicule, or worse…in order to be touched, blessed, healed and strengthened by Jesus Himself. The man didn’t realize that those spiritual leaders were actually much more handicapped than he. Their arrogance and hypocrisy had withered their character, atrophied their relationship with God and blinded their sight to the truth. The Lord wanted to make the handicapped man a trophy of His grace and a vessel that brought glory to God. 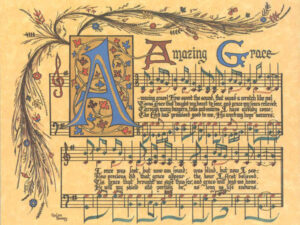 Amazing Grace, how sweet the sound,
That saved a wretch like me.
I once was lost but now am found,
Was blind, but now I see.

Several times in my relationship with the Lord, He’s asked me to stand up, step out, or expose places of my soul, character, or flesh, in order to bring a healing of some kind. He’s needed to disinfect wounds that spread fear throughout my heart, break shackles of insecurity that would cause withdrawal, or strengthen places of weakness that stamp failure across all my thoughts.

On this day, a man had to respond solely to Jesus, the area that was not whole. The area of his shame, his weakness, his deformity. Only. To. Jesus.

Everyone else merely had the privilege to be front-row witnesses of God’s goodness. For the self-righteous and prideful, the lens they saw through provoked criticism and anger. They became furious at the seeming disregard of their legalistic beliefs and creeds. But “the pure in heart shall see God” and those with a right heart got to watch Him perform a tender act of mercy, restoration, healing, strengthening, and love.

T’was Grace that taught my heart to fear.
And Grace, my fears relieved.
How precious did that Grace appear
The hour I first believed.

I truly have a withered hand today because of a disc that has ruptured in my neck. It’s affected more aspects of my day-to-day living than I ever imagined. I can’t stretch out my arm, carry my purse, feel my fingers, or hug my husband. I’ve dropped a plate and dropped my puppy. I’ve slept in a chair and fell off a couch. BUT…

But I have a weakness in my character today. It’s tempting me to withdraw from a situation that the Lord has invited me into because of the critical eyes of others and the condemning voices I have in my head. But He’s reminded me…it’s only between He and I. I only have to respond to Him. Let others view and speak what they want. It’s an audience of One…and He’s already well-pleased. 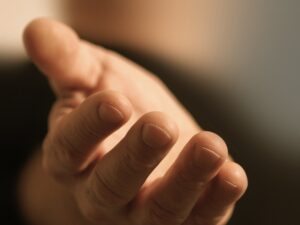 2 thoughts on “The Best Way to Stretch Out”